Although Taste looks as if its meaning is clear, it is a false friend which has more to do with your sense of touch than your sense of taste. Taste is a key or button such as you might find on a computer keyboard or a musical instrument. Klicken Sie mit der rechten Maustaste darauf means Click with the right mouse button. Remember also that the verb tasten means to feel or grope for something.

The concept of taste in English whether in the sense of flavour, preference or ability to be discerning is translated by Geschmack. So the phrase My girlfriend has good taste can be translated as Meine Freundin hat einen guten Geschmack.

Berliner Mauer
The Berlin Wall was built in 1961 by the East German government to stem the growing tide of people leaving for the West. It encircled West Berlin, leaving it cut off from the rest of West Germany and only accessible to West Germans via special roads known as Transitstrecken. Little of the Wall now remains since its fall in 1989, although a couple of sections have been left standing as a memorial. 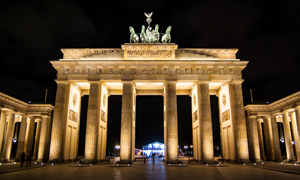